If there are "compositions" on stage (visual), director must be a composer. He follows the dramatic "composer" -- playwright. The great paintings of the past are the great source of learning about composing for stage.

Most of the pages on the subject are in Film Directing (above navigation) directory, but I wish that my students in THR331 Fundamentals of Directions could spend more time in our video shooting sessions and develop the camera-mind attitude. Of course, we do not stage live shows for the camera, but the points of punctuations must be present in the stream of live action. The floor plan exercises are similar in nature with the lighting areas planning and we get really close to the fixed primary motion. A good prompt book does resemble a shooting script. The shot technique asks for a strong visual discipline.

There are some basic rules in positioning actors on stage:

Full front \/ is the strongest.

Next is the full back /\

... Here is a lesson from Michelangelo:

a walk around it.

There are also FIVE basic levels: Standing, Sitting, Kneeling, Sitting on floor, Lying on floor. Emphasis by relation to height. Again, what is "strongest" and "weakest" depends on your mise-en-scene.

The "grouping" takes place even if you have one actor on stage. You still balance the positions against the set and furniture. It's easy to check you set by examining the exits and entrances. And again, I advise you to think in geometrical terms. Remember the Golden Triangle Rule? There are "triangles on stage. Try to see them before your actors enter. And, please, add the time dimension (duration) into your equations.

The stage laws (some) and "mood values":

"The visual center of interest is where the lightest light meets the darkest dark."

You have to train yourself to have this "frozen-frame" skill: to see you show "frame-by-frame"...

Did you notice that I broke this word "composition" in two: Com-Position (title)? You "position" actors on stage to get the combine effect. You move from one composition to another. There must be "tableau" pictures at some critical points. If you do it right they will be memorable and invisible.

"Center" is a dynamic target. You have to train yourself (and actors) to go from one fixed position to another. The transitions are another matter...

YES, THINK IN STATIC PICTURES! There must be an image (symbol) we can remember. Almost as if you would stage a (dramatic) group photo.

Acting Intro
* Balanceis -- the consideration of visual weight and importance. It is a way to compare the right and left side of a composition. * formal (symmetrical) balance * Radial balance *

"Variety" - You create variety when elements are changed. Repeating a similar shape but changing the size can give variety and unity at the same time. Keeping the same size, but changing the color can also give variety and unity at the same time. In visual composition, there are many ways you can change something while simultaneously keeping it the same.
"Depth" - effects of depth, space, projection toward the viewer add interest. Linear perspective in the real world makes things look smaller in the distance. Some artists try to avoid depth by making large things duller and small things brighter, and so on, to make the objects contradict realism...

to vector = to guide

Stage space vertical direction has to have at least three levels as well (horizontal planes are discussed in floor plan). First - the stage floor. In class we do the basics: on the floor, sitting on the floor, standing. The three you can do without any set. On stage it's always multi-level arrangements: in directing class we use chair, table, boxes. This is "vertical reading" of the visual composition. Ask yourself how many vertical levels did you use in your scene. None? Do you realize that "none" is a choice? Does you scene ask for strict non-vertical composition?

Do you understand why our stadiums are designed in levels? -- The flat floor = focus! What do you think I have to do on stage with the flat auditorium? Do you see the three levels?

Read Mise-en-Scene Page to understand the need for visual EXPRESSION of drama (conflict).

[ "Mirror Effect" of stadium = symmetrical (of house and stage), a half. See forms of stages on designers page.

Return to the Greeks but indoors + The Light of the Gothics (?).

"Cut" the world in two (stage as a mystery "wall" -- church tradition, the gates to the "other universe" = miracle, fantacy, dreams, inner world).

He is famous for lighting effects.
Good one to study. Color dramatic composition -- later. 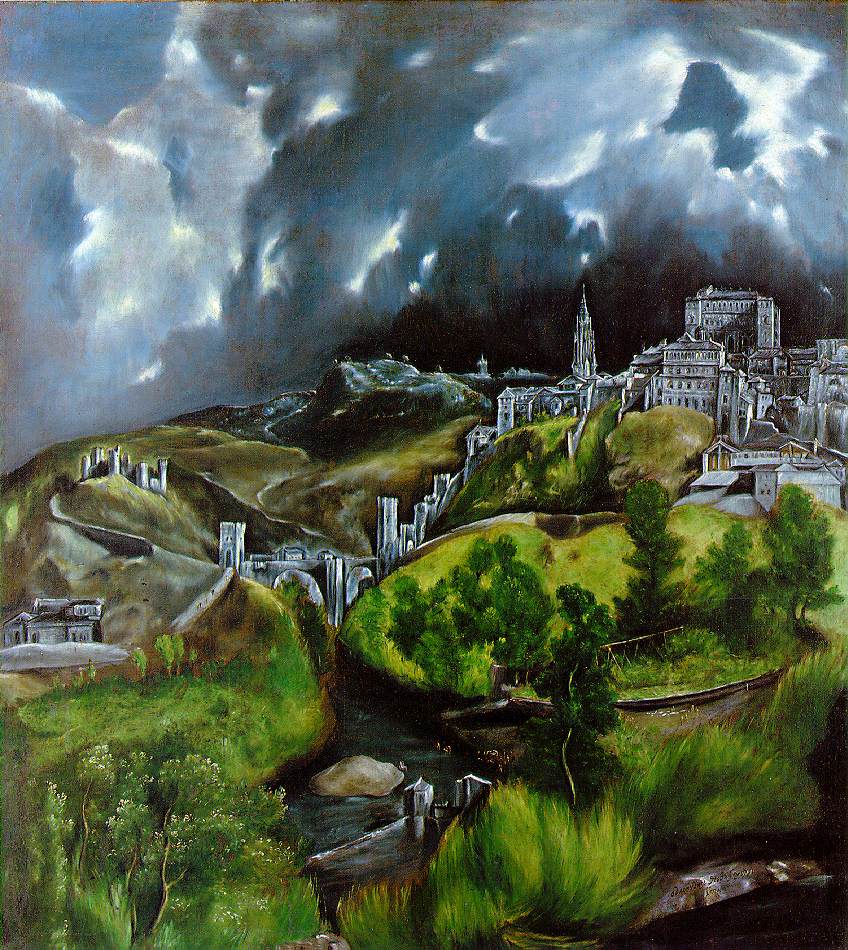 This is El Greco and as a teenager I spent several hours staring at it. 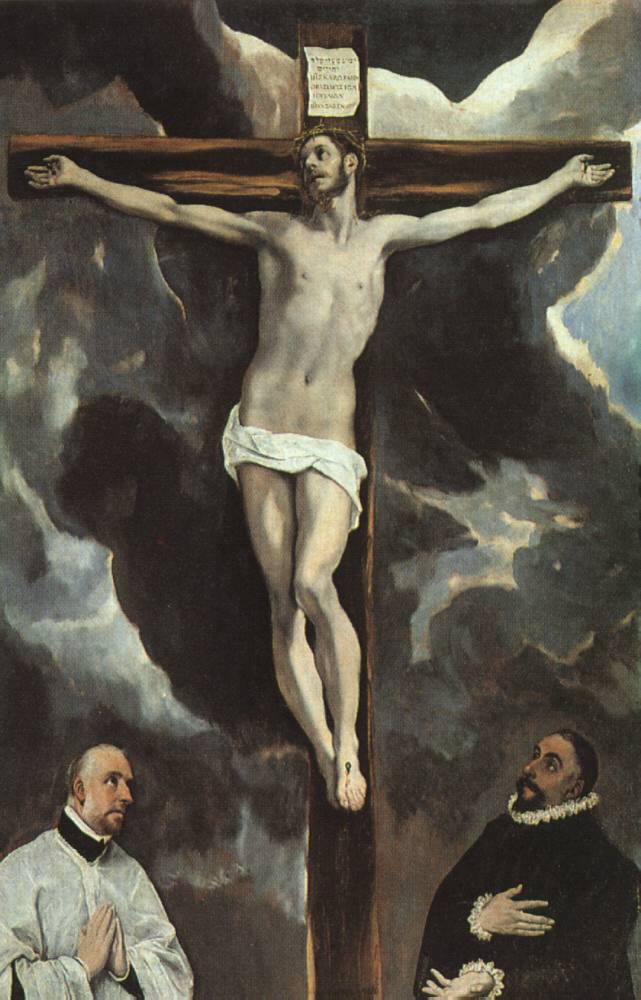 Color saturation, sometimes called "color intensity" or brightness can also give a feeling of depth and space.

FOCUS: Adoration of the Magi by Velazquez (1619), CLIMAX: The Madonna of the Rosary by Cavaggio (1605). (Free images from the Lycos Cyber Gallery)

How about some visual exercises?

Four lines: the focus is "between" them: the question-answer.

Breakdown by "triangles" (how many?)

[ Some (many) images are still missing! ]

[ two other directories could be used for this topic: film composition in FilmMaking 101 and 200X Aesthetics Files. ]

Anatoly, why do you call everything a "problem"?

Because we have to solve them. Like in math.

Analysis of the text must lead to your search for visual expressions of the drama.

"12 shades": in class (assign the color to each character, theme, scene and etc.)

Color and shapes of action... What is the "motion statement" in "radial" and "spiral" arrangements?

By body position – the actor who is most "full front" will have the focus.
By stage area – central areas have most focus.
By level – actor on highest level.
By plane – farthest downstage.
By triangulation – actor at apex of a triangle.
By contrast – actor who is apart from group (sitting, while rest of cast is standing).
By movement – moving actor will have more focus.

Go to Film-North: Concept, Color, Shot, Camera and other pages for more.

Select one scene from Hamlet and come with the main visual concept for it (class presentation).

Next: back to Part II 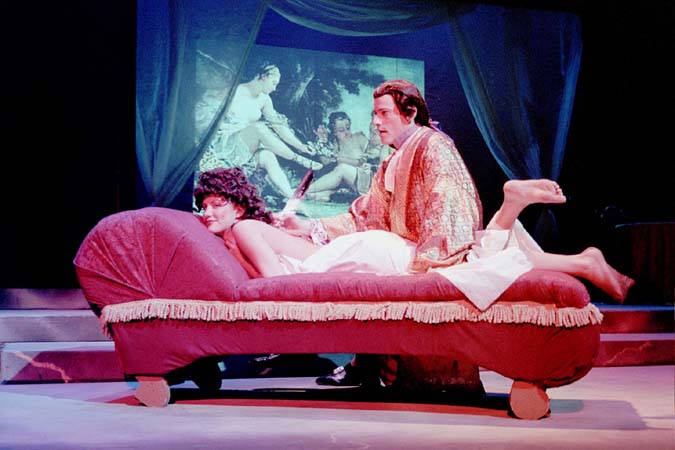 Color and Composition is concerned with properties and effects of light, color, composition and exploration of color contrast principles through color relationships. Applications are in two and three dimensions using a variety of media.