Director must die in his actors!

I thought that Meyerhold will be the master-teacher in this class, but he is very busy with biomechanics, acting II class I teach more often. I even reoriented the course, calling it "Stagematix: Directing for Actors" -- well, because I feel that actors need understandting of director's mindset more that directors. Besides, THR331 Fundamentals of Directing is the basics on stage directions. Who is DIRECTOR?

The best short answer I have is The Book of Spectator.

Director is the soul of spectator.

Of course, different directors represent different public, but all of them represent the theatre revolution of the 20th century, when the audience took over the stage...

How different the production process from the past, when playwrights, managers and lead-actors were "directing" shows?

Very different. Drama ruled the western stage for centuries. Not anymore. No more...

I. How to establish the genre? Comedy, first. What is Comical?

V. Subjective Time and the Show's Chronotope: Chronotop of the Spectator's Experience.

Between the Text and Actors: Character Analysis (see Acting Directory: Method, or Biomechanics) 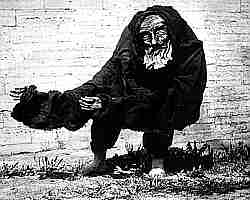 Comedy: Scenes from 12th Night. Olivia and Viola first scene. Or Taming of the Shrew *

Vsevolod Meyerhold had a hot temper, he was difficult, but he was Master (I'll call him "Master" from now on, for simplicity). I want to let you hear the dialogues Master and I have during the classes I teach:

MASTER: Ask them, if they read my books.
ANATOLY: They didn't, Master.
MASTER: Not a single one?
ANATOLY: Sorry. But I assigned them to read your "The Theater Theatrical" in the textbook, pages 164-184 (Directors on Directing)...
MASTER: What else is that book? Anybody I know?
ANATOLY: Stanislavsky, of course. Vakhtangov, Okhlopkov...
MASTER: What is this moron doing in the same book with me?

Actors endure long periods of unemployment, intense competition for roles, and frequent rejections in auditions.
Formal training through a university or acting conservatory is typical; however, many actors, producers, and directors find work on the basis of their experience and talent alone.
Because earnings for actors are erratic, many supplement their incomes by holding jobs in other fields.

... According to Equity, the minimum weekly salary for actors in Broadway productions as of June 30, 2003 was $1,354. Actors in Off-Broadway theaters received minimums ranging from $479 to $557 a week as of October 27, 2003, depending on the seating capacity of the theater. Regional theaters that operate under an Equity agreement pay actors $531 to $800 per week. For touring productions, actors receive an additional $111 per day for living expenses ($117 per day in larger, higher cost cities).

Some well-known actors—stars—earn well above the minimum; their salaries are many times the figures cited, creating the false impression that all actors are highly paid. For example, of the nearly 100,000 SAG members, only about 50 might be considered stars. The average income that SAG members earn from acting—less than $5,000 a year—is low because employment is erratic. Therefore, most actors must supplement their incomes by holding jobs in other occupations.

Many stage directors belong to the Society of Stage Directors and Choreographers (SSDC), and film and television directors belong to the Directors Guild of America. Earnings of stage directors vary greatly. According to the SSDC, summer theaters offer compensation, including “royalties” (based on the number of performances), usually ranging from $2,500 to $8,000 for a 3- to 4-week run. Directing a production at a dinner theater generally will pay less than directing one at a summer theater, but has more potential for generating income from royalties. Regional theaters may hire directors for longer periods, increasing compensation accordingly. The highest-paid directors work on Broadway and commonly earn $50,000 per show. However, they also receive payment in the form of royalties—a negotiated percentage of gross box office receipts—that can exceed their contract fee for long-running box office successes.

Stage producers seldom get a set fee; instead, they get a percentage of a show’s earnings or ticket sales.

Director's responsibilities: text, actors, stage (designers). Once I wrote a paper "24hour Actor" -- but this around the clock artistic existing even more true for directors (or any artist).

Floor plans: "9 squares" (use for your scene). Big and Bigger -- laughter. Mikado, Importance of Being Earnest, Inspector General.

[ back to our Hamlet showcase directory ]

To use Dangerous Liaisons for showcasing? Or Don Juan for directors? Drama and tragic comedy. No, thanks. Stay with Shakespeare, if it's stage directions.

Director as Spectator. The concept of spectatorship. [back to Title]

KEY concepts to talk in class:

ACTION -- The Law of the inner justification: motivation. WHY

Logic and Common Sense as the baseline in directing

"Fight with the Text" (Stage Languages -- and stage sentences): subtext and counter-text (examples from your scene -- homework)

New Profession: write in your journals, why director emerged in the history of theatre so late.

[ the joint directing-acting classes : Spring 2003 -- Acting One and Acting Two together with the directing class! ]

(Where is the form I give to the class on the first day? Director's resume at the end of the semester? Do not let them into Film directing unless they take Stage Directing! Can I find a week in Stagematrix for the camera work?)

Spring 2003: better use of the textbook (see Amazon in the right table) [ What is the difference between film and stage directing? ] 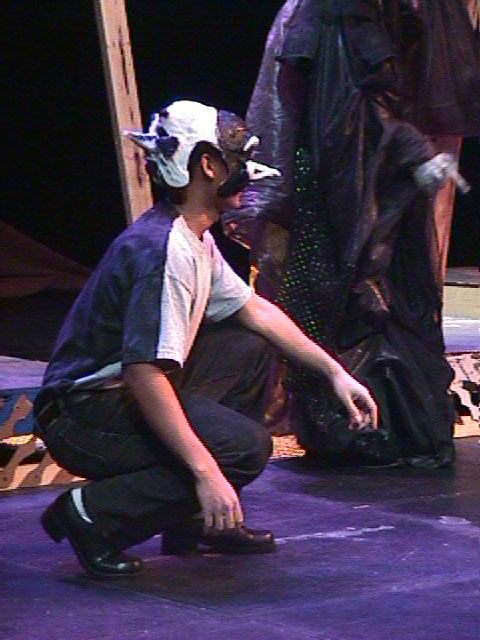 Agents make money by getting an actor work. The standard commission of 10% of the actor's earnings is normally deducted directly from the paycheck. In order to get an agent, an actor must interview. For example, an actor interested in doing commercials should seek an agent who specializes in them. Some agencies are exclusively for commercials, other large theatrical agencies (meaning film & television) have commercial departments. There are publications such as Lawrence Parke's The Agencies (available for about $10 at Samuel French bookstore, 7623 Sunset Boulevard in Hollywood) which describe each agency and its specialization. Agents must be both licensed by the state and franchised by the unions. A list of franchised agencies is available from acting unions such as SAG, the Screen Actors Guild, at (213) 954-1600 or online at www.sag.com/agentlist.html. 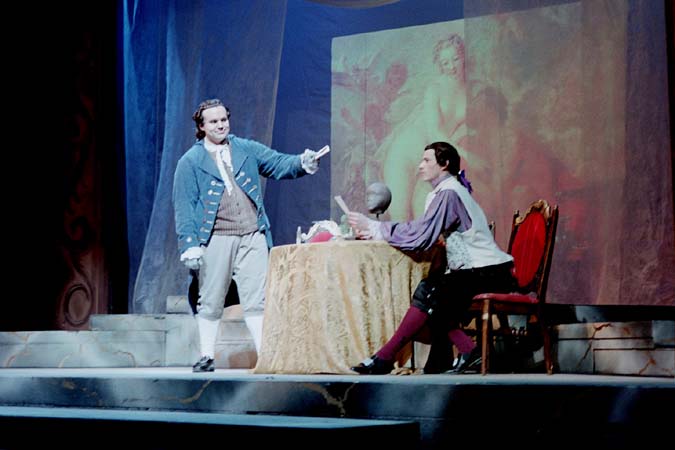 ShowCases: shows.vtheatre.net
Casting: Actors are selected to play roles through a process called casting. It occurs in several phases including a review of head shots and resumés, interviews, auditions, and callbacks. For famous actors, casting may only involve negotiations with talent agents and personal managers. Casting may be open or closed, union or non-union, and on the professional level is usually announced only in the trade papers. Open casting implies that anyone can try out, unless it is a union project in which case only those who are members will be heard. Closed casting implies that only a select group will be considered, such as in the case of a stage acting company which casts from among its members, or a university that limits casting to theatre majors only.
In a sense, commercials are closed cast because they are conducted directly through agents and not publicly announced. To do casting work most efficiently, some form of sifting is usually employed. For example, some actors may be eliminated purely on the basis of their picture and resumé, others are washed out in an interview, and those that survive are invited to actually read for a part. When an audition does not employ any presifting, and all comers are heard, it is often referred to as a cattle-call. In most cases the actors who are most suited for roles are given a callback, which means they are invited to read again to help those doing the casting to make up their minds. At a callback one actor is often reading against others, meaning that they are being compared. One of the things that a director is looking for in a callback is the actor's ability to take direction. This means being able to change some aspect of the reading in response to specific coaching. For instance, the director may say: "Can you do that scene again as though you are proud of yourself?" An audition may be public or private. In a public setting everyone who is auditioning is in the same room serving as an audience to the readings. In a private audition, actors are read individually, often against actors hired just to read the other parts. http://homepage.mac.com/roberthuber/school/1delec09.html

"The essence of cinema does not lie in the images, but in the relation between the images!" Eisenstein, 1926

"Images ought not to signify ideas, but rather to construct and motivate them..." Eisenstein

"...outside of agitation, the cinema does not exist." Montage of Cine-Attractions

"One learns by teaching others. Pedagogy is transitive. Or it isn't pedagogy" Augusto Boal

You direct or you are directed. Anatoly

Directing is imposing the slavery. The rest is freedom. A

Directing is a thought. AA

"I am often asked why I don't pass on to young people what I have accomplished over the years. Actually, I would like very much to do so. Ninety-nine percent of those who worked as my assistant directors have now become directors in their own right. But I don't think any of them took the trouble to learn the most important things." Akira Kurosawa

The worse choice is not making one. Anatoly

"The role of director encompasses the coaching of the actors, the cinematography, the sound recording, the art direction, the music, the editing and the dubbing and sound-mixing. Although these can be thought of as separate occupations, I do not regard them as independent. I see them all melting together under the heading of direction." Kurosawa

"With a good script a good director can produce a masterpiece; with the same script a mediocre director can make a passable film. But with a bad script even a good director can't possibly make a good film. For truly cinematic expression, the camera and the microphone must be able to cross both fire and water. That is what makes a real movie. The script must be something that has the power to do this." Kurosawa

«The Method was all build up by the media into something it's not. I started the Actors Studio. That was my idea. I got Lee Strasberg in- a born teacher. Lee formulated The Method. But all really good actors live by their spiritual content. It's about when the emotion is real and not simulated. Brando - that's real thing. He wouldn't say he worked with The Method.» (Elia Kazan, Photoplay, August 1983)

"Don't shout like that. When actors are shouting they can't variegate their voice. When I was young I worked with Constantine Sergejievich (Stanislavski). He believed I was loudmouth and forced me to speak softer. But I didn't understand and subverted myself..." - Meyerhold

"Actors work to all intents starts after the premier. I believe that a performance is never ready in premier. And that is not because we didn't have the time to, but because it matures only in front of the audience." - Meyerhold

"Films are never completed. They're only abandoned." -- George Lucas

"There are no rules in film-making. Only sins. And the cardinal sin is dullness." -- Frank Capra

"The main thing about directing is: photograph the people's eyes." -- John Ford

"If a person can tell me the idea [of a film] in twenty-five words or less, it's going to make a pretty good movie. I like ideas, especially movie ideas, that you can hold in your hand." -- Steven Spielberg

"Cinema should make you forget you are sitting in a theater." -- Roman Polanski

"I write scripts to serve as skeletons awaiting the flesh and sinew of images." -- Ingmar Bergman

The director is simply the audience.... His job is to preside over accidents. --Orson Welles