by 1900, the term "director" was in wide-spread use and the primacy of director became clear – directors placed themselves at the center of production…

Product of Industrial Age and Realism.

Some of the director's functions done earlier by other personnel:

Ancient Greek: The "choregus" (head of the chorus) often directed / coordinated song and movement.
Playwrights probably staged the plays, and probably cast them.
We know too little to understand if they "unified" the production.
Roman: a wealthy citizen organized, but we still do not know to what extent they "unified."

All were primarily managerial skill, rather than artistic…

David Garrick – actor/manager of the Drury Lane Theatre in London (from 1747-1776), which still exists today.
His innovations:
No audience members on stage (had been the practice for wealthier, higher status folks to be on stage during the performance).
"Natural" style of acting (though to us it would probably still seem stilted).
Importance of scene design.
Considered a director in his day, but term would not have been used (even today in Great Britain, the term "producer" is used instead…)

Richard Wagner (1813-1883) [pronounced Vahg'-ner]-- theorist and composer – wrote operas that were fantastic, mythical, and patriotic– ran the Bayreuth Theatre [pronounced "Bye'-roit"] (1876-1883) (which still exists, run by Wagner’s descendants, and until a few years ago did does nothing but Wagner’s operas).

He wanted total control over the production, and focused on illusionistic theatre.
An important factor in the development of realism, also, but his operas were not at all realistic.

George II, Duke of Saxe-Meiningen (1826-1914) -- from 1870-1890, his theatrical troupe toured Europe -- known for unifying the productions.
Specialized in historical dramas.
Emphasized historical accuracy and realism (particularly in costumes and settings).
Emphasized a pictorial style – focus and composition – and was particularly renowned for his crowd scenes and "ensemble."

Edward Gordon Craig – after 1020 – a designer – wanted "uber-marionettes" – so that he could control variables and unpredictability of actors – never realized.

THUS – by 1900, the term "director" was in wide-spread use and the primacy of director became clear – directors placed themselves at the center of production…

No real theories yet about these new directors or the changing face of director in modern theatre. 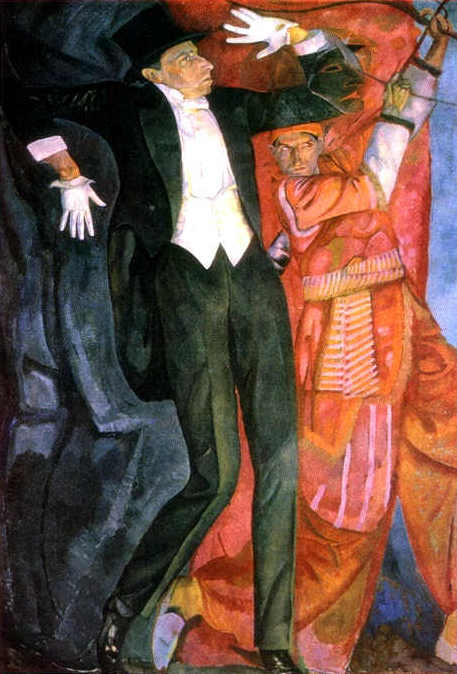 534 B.C. Thespis wins the first public contest for tragic poets in Greece, and the term thespian derives from his name. He also introduces masks, which become a staple of Greek and Roman theater.

350–250 B.C. The Hellenistic or Colonial period marks an era when comedy is preferred over tragedy. Old Comedy, buffoonery and farce that often attacks individuals and portrays the foibles of a social class, evolves into New Comedy, a more polished and refined humor that centers on the shortcomings of the middle class. Comic drama moves from politics and philosophy to everyday life.

C. 500–800 Theater is all but extinct in both the western and eastern Roman Empires during the Dark Ages because Christians oppose the entertainment.

C. 900 The church introduces dramatic performances to Easter services, acting out the story of the Resurrection. Ironically, the institution that discouraged theater is responsible for its rebirth.

1495 Everyman, the best surviving example of a morality play, is written. The morality play touches on large contemporary issues with moral overtones and describes the lives of everyday people facing temptation.

1489 Ballet is performed for the first time.

1576 The Theatre, the first commercial theater, opens in London. It is also the first Elizabethan playhouse.

1594 The Chamberlain's Men, the leading Elizabethan and Jacobean theatrical company of the day, is formed. William Shakespeare is the chief playwright and Richard Burbage its most famous actor. After 1603 the group is known as the King's Men. The Admiral's Men, the group that performs the works of Christopher Marlowe, is also formed and rivals the Chamberlain's Men.

1597 Jacopo Peri's musical fable, Dafne, often considered the first opera, is performed at the palace of Jacopo Corsi. Opera becomes the preferred entertainment of the aristocracy.

1598–1608 William Shakespeare writes Much Ado About Nothing, As You Like It, All's Well That Ends Well, Julius Caesar, Hamlet, Othello, King Lear, Macbeth and Anthony and Cleopatra.

1607 Claude Monteverdi's Orfeo, regarded as the first masterpiece in opera history, is performed and revolutionizes music by establishing a tonal system and giving the recitative a more flexible accompaniment.

1619 Teatro Farnese in Parma, Italy, uses the proscenium arch for the first time.

1642–1660 Following the civil war of 1642, the Puritans close or burn down all English theaters and forbid acting.

1643 Molière incorporates an acting troupe called Illustre Theatre. Although initially unsuccessful with his troupe, Molière goes on to be one of history's most famous and enduring playwrights. His work includes Tartuffe (1664), Misanthrope (1666) and Bourgeois Gentleman (1670).

1660 Women start appearing in French and English plays. Elizabeth Barry and Anne Bracegirdle are among the pioneers.

1685 Alessandro Scarlatti founds the Neapolitan School of Opera, which establishes the da capo, or three-part aria.

1730 Romeo and Juliet, the first play by Shakespeare to be presented in America, is performed in New York.

1733 La Serva Padrona by Giovanni Pergolesi is performed in Naples, heralding the popularity of opera buffa or comic opera.

1734 French ballerina Marie Camargo stirs controversy when she raises dancing skirts above the ankle for greater freedom of movement.

1751 The first professional theater company in the colonies, the Virginia Company of Comedians, opens a temporary wooden playhouse in Williamsburg, Virginia.

1778 Milan's Teatro alla Scala, Italy's leading opera house and one of the world's most renowned, is built.

1786 Mozart collaborates with Lorenzo da Ponte on The Marriage of Figaro, which premieres in Vienna. He completes Don Giovanni the following year, and it premieres in Prague.

1816 Gaslighting is used for the first time in American theater at Philadelphia's Chestnut Street Theatre. Thomas Drummond invents the limelight, which is used in the same manner as the spotlight is used today.

1830–1850 The Romantic period in ballet sees ballerinas making technical and artistic strides in the art form. Until this period, men dominated the stage.

1843 The Theatre Regulation Act of 1843 bans drinking in legitimate theaters. Many tavern owners take advantage of the situation and renovate their establishments to accommodate live performances.

1859 The French Opera House, the first great opera house in America, is built in New Orleans.

1868 Lydia Thompson and her British Blondes bring burlesque to the United States.

1879 Henrik Ibsen's A Doll's House, a revolutionary play that centers on the repression of women, deeply offends conservatives and thrills a newly awakened European conscience when it premieres at the Copenhagen's Royal Theatre.

1890 Modern dance emerges when choreographers and dancers begin to rebel against traditional ballet.

1900 Floradora opens at Broadway's Casino Theatre. It introduces the Floradora sextet, a predecessor to the chorus line.

1901 Founder of the Moscow Art Theatre, Konstantin Stanislavski formulates the revolutionary Stanislavski Method of acting, which requires actors to see and hear on stage as they do in real life, enabling them to react to theatrical situations in the same way they would in real life. He is credited with launching the age of the great director in modern theater.

1902 Claude Debussy introduces impressionism in Pelléas and Mélisande at the Opera Comique in Paris.

1904 The London Symphony Orchestra is established. Anton Chekhov introduces modern realism at the premiere of The Cherry Orchard at the Moscow Art Theatre.

1909 Serge Diaghilev opens the Ballets Russes de Serge Diaghilev, which begins the era of modern ballet and his 20-year reign as ballet's leading figure. Moving away from full-length works characteristic of Romantic ballet, he creates new, shorter ballets. Mikhail Fokine is Diaghilev's choreographer and is considered the most influential choreographer of the 20th century.

1920 Eugene O'Neill's first full-length play, Beyond the Horizon, is produced on Broadway and wins a Pulitzer Prize, marking the beginning of modern American drama. Rising popular interest in African-American literature sparks the beginning of the Harlem Renaissance.

1927 The Broadway musical links with opera in Jerome Kern's revolutionary Show Boat. Dancer Isadora Duncan dies when her scarf gets caught in the wheel of a moving car.

1930 Jean Rosenthal, one of the greatest lighting designers in theater history, pioneers the concept of stage lighting.

1933 Sally Rand's fan dance is a hit at the Chicago World's Fair.

1946 George Balanchine and Lincoln Kirstein establish the New York City Ballet. It makes its home at Lincoln Center in 1964.

1950 Broadway classic Guys and Dolls debuts at the 46th Street Theatre and becomes an instant hit. The show ran for three years and became one of the Great White Way's longest-running shows, with 1,200 performances.

1951 Yul Brynner makes his first appearance as the king of Siam in Rodgers and Hammerstein's The King and I. Gertrude Lawrence costars (March 29).

1952 Jose Quintero's revival of Tennessee Williams's Summer and Smoke premieres at Broadway's Circle in the Square Theatre and is the first major Off-Broadway success. Merce Cunningham forms his own dance company.

1957 Leonard Bernstein's West Side Story debuts on Broadway and brings violence to the stage. Eugene O'Neill's A Long Day's Journey Into Night is produced posthumously and wins both the Tony Award and Pulitzer Prize.

1962 The first dance concert is held at New York's Judson Memorial Church, marking the beginning of the Judson Movement and postmodern dance. Judson dancers also introduce the use of a performance space instead of a stage. Judsonites include Meredith Monk, Trisha Brown and Lucinda Childs.

1971 The Kennedy Center for the Performing Arts opens in Washington, D.C. with the premiere of Leonard Bernstein's Mass.

1980 Mark Morris establishes the Mark Morris Dance Group in New York and is widely received as the most promising modern-dance choreographer of his generation.

1995 The Metropolitan Opera installs screens on audience seats that display captions, to attract a wider audience.