Director is the first spectator... maybe the best one. Spectator is the PLACE, where the show takes place. He is your final medium, director. Everything we did so far was to produce the music in heart, to bring up his fears, hopes and visions. Yes, we end where we began, but now it's not you, it's him to experience the living...

"The director is simply the audience. . . . His job is to preside over accidents." Orson Welles

Lesson I : Spectacle and Spectator

Part Six -- Director and the Theatrical Space (Director's Eye, 2003 textbook): references back to 4 (Style and Viewpoints) and 5 (Collaboration). Mise-en-scene and constructed chronotope are the given surcumstances for the public. Remember, there is no show (spectacle) without our public becoming a part of it. Spectators are the engine and energy of the show. Invision the spectator as a focal point of dramatic action.

How to make "spectators" work? If they don't, your show won't.

Remind yourself that the final act of the process takes place in the minds and hearts of the public. Remember that you are directing thoughts and feeling of your audience! Everybody on stage must understand that the actual "stage" and "action" is the house!

Maybe you are sick of my "love stories" -- but nothing I can do without talking about the biggest love of all. Yes, the writers, actors, designers -- we all -- are with love with them, the strangers. The souls we never knew and the hearts which will go away after the show into this big, endless life without becoming our lovers...

Is it so? It's so sad, Anatoly. Will we see them again? Will they ever talk to us? I see it the eyes of my actors. What could I say -- I am one of them, the main spectator; I have to speak for them...

What we need is a new kind of theatre... We need new forms.... I don't want to show life how it is, or the way it should be, but the way it is in dreams. Treplyov/Meyerhold, The Seagull (1898)

[ * the bridge between film & stage directing: read The Book of Spectator * ]

-- You have empowered hundreds of actors, and in a sense a lot of audiences because of the kind of plays you put on and the way you put them on. Have you ever entertained the idea of yourself as someone who went out to people and gave them a strategy, empowered them to find the truth in their own minds or to glide smoothly from the pressures of their daily lives to a theatrical experience which might give them insight and make living that bit easier?

Peter Brook (PB): I think it’s a very important question. For ten to fifteen years around the 60s, this was a very central idea. People were going out in all directions, working directly in the community, to the point where the idea that a theatre was in any way a special place was being blasted open. The idea of an audience participating directly, being part of the theatre action became more and more widespread, and we did a lot of this at the beginning of our Centre. We played constantly for three years, but never in a theatrical context. We worked in different ways with people, with children, anywhere within a living context. I came to a conclusion, which like all conclusions is a personal and provisional one. That is there are special experiences which maybe can change a life, which demand special conditions, like exceptional concentration. When there is exceptional concentration, the experience can go farther. There are great liberating experiences. For instance now, with this big audience, there are lots of games we could play that would fill the theatre with energy. We could do vocal things, shout, sing, do a sing-song together that would give everyone a very warm, rewarding experience. But that couldn’t be as memorable and as special as if you all participated in another way. Because participating isn’t only joining in. I think this was the trap of 60s thinking, that joining in and doing the same thing as the performers is participating. There is another form of participation. The fact that an entire audience can be riveted in silence on one actor standing in the middle of this stage and saying a few words – for instance a soliloquy from Hamlet – but saying it in such a way that he touches everyone’s imagination. Each person listening is taken beyond himself and feels "Ah, this is something about my own deepest feelings that I’ve never known, and this person standing there is speaking for me and helping me to know something I couldn’t know without that". If that happens, the audience isn’t just passive.

The audience is drawn in and is participating, and that becomes a special experience. I think this is really what one must demand of the theatre. One must respect and encourage everyone who wishes to improve social conditions by using theatre techniques. But you must recognise that one doesn’t rule out the other. A playhouse is not important in its own right; it is only valuable because a large number of people can see and hear at the same time. That’s why a playhouse where people are in a circle is better than a proscenium theatre. Because the relationship is more human. It’s the specialness of experience, which doesn’t often happen, that is the reason for this form of theatre having its place.

"Backwards and Forwards: A Technical Manual for Reading Plays" by David Ball

Directing Style -- next part? Use film directors (more obvious): Bergman or Tarkovsky, for example. What does constitute an individual style? POV on values? Unique perception of the world? "Voice" -- in literature. Special theme(s)? Style is the place where form and meaning become one. Rediscovery of the old -- story, genre, myth? Again, the old dilema: discovery or invention? Both. [I must start from the Script Analysis pages.] George Black : Contemporary Stage Direction

What is the difference between Public, Audience and Spectators?

You must several projects in your head. Let them compete. Write down the titles of the plays you want to direct. And -- why? 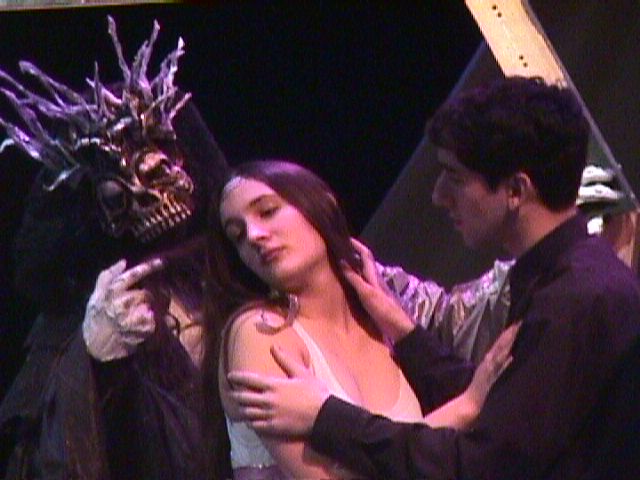 Play Directing by Dean and Carra [ ]

A towering and bizarre personality, shrouded in legends and myths, an object of both hatred and veneration. .... Meyerhold earned worldwide renown in his lifetime, but his end was that of a martyr. Twentieth-century theater is unthinkable without Meyerhold..... Alla Michailova

theatre glossary McGraw-Hill + theatre glossary + MY glossary portal 07
Whatever thread one takes up in the history of twentieth-century drama leads back to Stanislavsky. James Roose-Evans